Me annoying the trout on the Taylor River near Gunnison, Colorado.

In 2010, I sold Minerals America to Michael Jacob who continues the business at shows in the east.
Michael is a retired electrical engineer and former U.S.Navy officer with mining experience and a real keen sense of    minerals. I hope you will support his business.

​    I continue doing business but with a much more limited show schedule, a few near home and the major shows in Denver and Tucson, the latter I do with my long-time associate Cal Graeber. My schedule is listed on my Show and Event Schedule page. 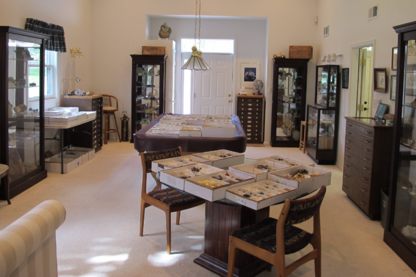 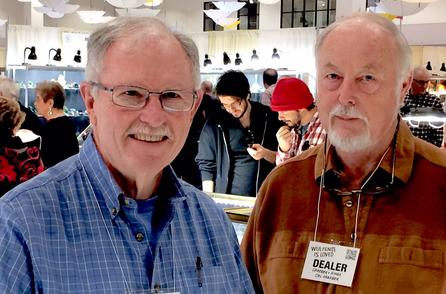 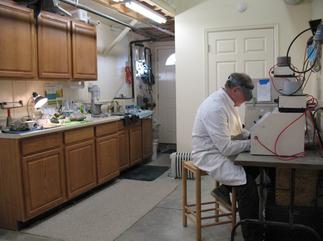 Part of my specimen preparation lab with me at the air abrasive unit.

The header on this page shows some specimens that I have placed in private collections or institutions over the years.

Below is my seasonal view of Colorado.  What a great place to live!

I post on FaceBook whenever major changes are made on this site. You can become a 'friend' at www.facebook/leonardhimes.1. FaceBook seems to generate bogus Friend requests. Please confirm your request with an email to me at leonardhimes@aol.com to be sure it is accepted.

About the site
This site introduces me and the services that I provide to the mineral specimen collecting community.  It is designed to educate, inform you of my activities, and offer specimens for sale.

I will add articles and news items, such as show reports, from time to time, so check my BLOG page frequently.

About Me
My goal is to get good specimens to good people who will enjoy them.
I have been in the mineral specimen business since 1973, at shows first as Minerals America (which I sold to Michael Jacob),

more recently at local shows as Leonard Himes, and at major national shows as Graeber & Himes.

I buy and sell high quality mineral specimens at shows, by mail, and from my Colorado office.

To learn more about me scroll down below the picture at the bottom of this page.

If you will be in Colorado, we can arrange a visit if we are not on the road for a show.

Me with Cal in our Tucson Main Show (TGMS) booth recently.

Maybe the only photo of cal I have ever seen that actually looks like him. 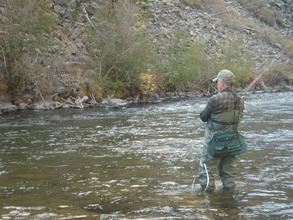 While Spring is springing elsewhere, Colorado still thinks it is winter.

We have had heavy snows in mid-March so the king should be great.

More than you probably wanted to know about me.

I began collecting minerals in the fifth grade, something not easy to do when you live in Florida as I did. By high school, I was winning State Science Fair awards in Geology and field collecting wherever summer travel allowed.

I decided to major in chemistry at Florida State University rather than geology because so many of the geologists I knew were pumping gas or doing something similar for a living. I did surveying for the Florida Geological Survey for two summers and spent two more in chemistry research labs at FSU. After graduating, I taught high school chemistry in Orlando.

As I taught, I learned that I needed to supplement my income, so I learned to find and dig specimens during the summer and wholesale them to rock shops. Of course, that started me building a collection of field collected minerals, the only personal collection I have today.  In those early days I did collect purchased and traded specimens and had competition cases with thumbnail and miniature minerals earning AFMS Master status.

My summer collecting sales led me to start Minerals America in 1973 and I was soon retailing at local shows on weekends, predominately in the Southeast. I next began dealing at shows around the US during summer. I met Cal Graeber at the AFMS national show in St. Louis in 1976 where he was working for Pala Properties International. Cal became an independent dealer shortly thereafter and I invited him to share my booth at the next California Federation Show in Anaheim. After a few years we began doing shows in Tucson on the mezzanine of the Desert Inn. We began using Graeber & Himes when we were accepted into the Tucson main show in the early 1980s. We are still at it, calling on clients and attending major shows. It has been a great relationship and we plan to stay at it for a while.
In 1980, I took a sabbatical from teaching and earned my Masters degree, studying mineralogy with Abe Rosenzweig at the University of South Florida. I returned to teaching where I developed a unique second-year chemistry program and third-year research opportunity for my students. Eventually, I was chosen to coach the US team in the International Chemistry Olympiad. I was active in the American Chemical Society serving on several national committees and even chaired the Local Section in Orlando. I also participated in a summer-long program in Atomic and Nuclear Physics at the University of Arkansas and three summer chemistry programs at UC Berkeley. I taught summer institutes for chemistry teachers in Florida and later for AP teachers in Colorado. In 1992, I began a Ph.D. program in chemistry at the University of Northern Colorado. It took a while, but I finished it in 2001 after retiring from teaching high school in 1996. Since then, I have been working full-time as a mineral dealer, enjoying the freedom provided by self-employment and having the time to visit collectors from coast to coast.
I decided to continue living in Colorado because the field collecting, skiing, and fishing are great. The fact that the Denver-Colorado Springs area is a major center of the mineral business didn't hurt, either.

Part of my showroom set up for an open house.

I also field collect, operate a lab for specimen preparation and repair, appraise collections, and provide other collection consulting services. There are separate detailed pages for each of my activities as well as galleries of  photos of specimens currently in my inventory. Please use the navigation bar at the top of the pages to see them.​